I was on a palm-fringed island in the Maldives when I saw two girls, both instructors with the dive centre at Vilamendhoo, coming in from the beach and looking happy in their bikinis. One, Leila, was Swiss married to a Maldivian while the other, Sylvita, was Spanish and partnered an Austrian.

I asked them to go back and recreate the moment and photographed them for use on the cover of Diver Magazine’s Travel Guide. They were happy to oblige and I grabbed a few images of them acting it out again. It took only a few minutes to do but it seemed to me to encapsulate what a tropical island holiday was all about.

The trouble started when I innocently posted one of the pictures I’d shot at 6fps on the FaceBook page of a closed group of photographers that I was a member of. I thought it was a good example of the spontaneity obtained with a DSLR and rarely possible with compact cameras thanks to the time-delay in getting a picture and the absence of a buffer. It represented a moment that was grabbed. From some of the reactions you would have thought I’d posted something pornographic.

I received vitriolic messages accusing me of all sorts of perversion. One was even from a man but no doubt he was told what to write by his partner. The terms ‘priapism’ and ‘phimosis’ were mentioned. These messages were so upsetting that I deleted them immediately rather than let one of my daughters stumble on one and be upset too. Deleting them was a mistake. You might have enjoyed reading them.

The girls in the picture saw some of the reaction that was posted and were confused and upset about it. What had they done? It was no more than being photographed in what they wore on a day-to-day basis.

As Leila wrote to me, “My God, what is going on with this picture? If it would be completely naked I could understand it. But on some places you really don’t need a drysuit for diving.” (SIC)

When the Travel Guide was announced on the magazine’s FaceBook page, it attracted a lot of ‘likes’ but some predictable objections from the same people. The few objectors were both vociferous and aggressive in their reaction to it. They had decided to set themselves up as some sort of moral guardians.

One, the man, said, “Yep, lovely photo and no problem with that on a 1970’s Travel Agency poster. There’s a significant number out there that cringe when they see this sort of stuff though. It doesn’t shock. It’s just boring and past it.”

Another, a woman, obviously angry, wrote, “The guy who came up with the rubbish belongs to be shot. Go back into the cupboard with this crap. Honestly, it shows the wrong image of the industry, which prevents people taking up this sport, puts their partners off because they come under the impression diving is a dammed swinger club. All down to the shortfall in somebody’s own swimming trunk! Wake up. We are in the 21st century! You have to come up with something better than some cheap image! By the way the girls are nice, but the image is more related to a warehouse sale than to diving! An absolute let down!” (SIC)

This again appalled the girls who appeared in the picture, when they read it. They were photographed wearing the sort of swimming costumes they wore every day. Those that felt they were offended by this innocent picture had very much offended the girls featured in it.

One of the girls wrote to me and said, “They obviously don’t get it.”

I assume she meant they didn’t understand that people wear swimming costumes and bikinis on tropical islands. Well, I think that’s what she meant.

So while it truly represents what happens on tropical island holidays, it seems the ‘Taliban’ of diving want it stopped. Of course their reaction is not typical. The bookstalls would not be full of women’s magazines with similar pictures if it were. If women didn’t like looking at women, magazines like Vogue would not exist.

There were some uncharitable reactions to the negative reactions too. One Englishman in Mexico said, “Don’t get me started on the business of political correctness.”

Another supporter even went as far as to email me privately from the USA with the following message:

“Oh my God… women in bathing suits… you should be burned as a witch or infidel.  We used to get the same complaints in the early 1990s about the same thing in our magazines by a militant group of about a dozen fat chicks who called themselves “Women Who Dive”. 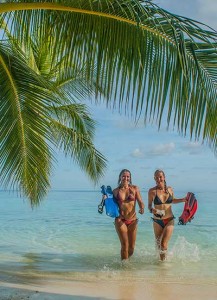 We simply chose to ignore their bitter philippics and attempts to influence our advertisers to pull their ads. It was ridiculous. Seriously, what do women wear to the beach? And if you can’t handle women in bathing suits, you better not go to the tropics or on dive trips. I will never underestimate the supreme idiocy of a certain portion of the diving industry.”

Here’s the offending picture. I hope you’re not offended.

← In the Name of Science
Recycling, Croissants and Parrots: Three Tips on Bonaire →