Diving lost of one its true gentlemen and most creative filmmakers on February 3rd. My dear friend Mike deGruy was killed in a helicopter crash in Australia while working on a project for famed Hollywood director James Cameron. Also with him was Andrew Wight, another talented filmmaker who produced the feature “Sanctum” in 2010. Wight was piloting the Robinson R44 helicopter that crashed and burned shortly after takeoff. Both men were killed almost instantly. Mike had just turned 60.

I was lucky enough to do a variety of projects with Mike and we shared the stage at nearly a score of film festivals and dive shows across the country over the years. 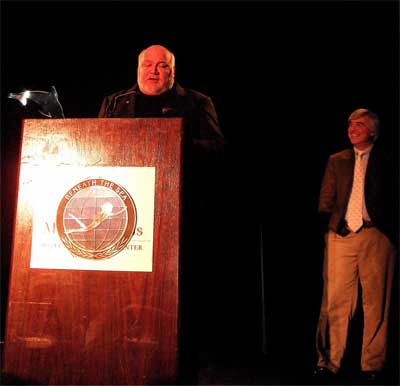 Bret and Mike at Beneath the Sea

We first met on a documentary for National Geographic Explorer over 16 years ago and instantly hit it off. We were filming humpback whales on the remote Silver Bank and the production had all sorts of complications that led to setbacks that we always managed to overcome. I learned immediately that nothing could dampen Mike’s enthusiasm and we discovered that we shared the same wicked sense of humor. When the producer would panic about the whales not cooperating or weather that turned calm seas into a washing machine… Mike and I would inevitably lose ourselves in a laugh and counsel the anxious topside “suits” to chill out with promises that the next day would be better. It always was.

We used rebreathers for the work with whales and this was during the early era of such units for mainstream diving. I had to teach Mike and other members of the dive team to dive the complicated apparatus while we were on location at sea bouncing around in large swells while the whales watched us with amusement. It was sort of like learning to sky dive as the plane took off and we strapped a parachute on a student with hasty instructions before pushing them out the door at 5000 feet. But Mike was the ideal student from years of practical diving in difficult situations and he quickly mastered the new equipment.

In the evenings we’d sit together on the boat’s upper deck watching the sunset and listening to the whales spouting at us from nearby. These sessions included timely consumption of red wine and we formed a lasting friendship that endured. Ours was a unique bond and whenever we got together we always immediately picked up right where we had left off the last time in a stream of consciousness dialogue that never seemed to have been interrupted. His personality was one of boundless good humor and a constant smile. I cannot imagine a person more fun to hang out with, especially when isolated at sea for long periods.

We were so alike in many ways and still vastly different. We both lived our careers underwater and had survived some incredible challenges including shark attacks. Fellow divers always inquired about our “battlefield” scars and Mike won that contest with a forearm riddled with the aftermath of surgery when a reef shark decided to chomp on him in 1978… six years after I had survived an attack by two big oceanic white tips that killed my buddy. We both were asked to be contributors to several books on sharks and readers marveled at our survival instincts.

Mike was always at home in a tuxedo or suit. I hated the thought of having to dress up for anything including my own wedding. So Mike came in a Hawaiian shirt and shorts. Perfect! I’m a big ex-football linebacker. Mike barely broke 150 pounds dripping wet and topped out at maybe 5’7″ on his best day. But his talent for filming and his oversized personality led me to nickname him “Little Big Man”… it suited him.

We both loved music and when I attended his 50th birthday party in 2001 at the exclusive Montecito Country Club in Santa Barbara, he arranged to have my dinner mates be legendary singer Karla Bonoff and her longtime bandleader Kenny Edwards. It was a memorable evening in all respects as Mike and I finished off the Grand Marnier and staggered into the night leaving vapor trails while supervised by our more sober companions.

He loved visiting me in Maine and we bounced back and forth between coasts as he educated me on life in California and his passion for hot sauce that went into everything that came out of the kitchen. I just could never understand why it had to go into the ice cream…

I was surrounded by friends celebrating my 61st birthday on Friday when I got the call about his death. It shook me to the bone. Mike’s birthday was December 29th and we had last spoken a few days before that and he told me about his upcoming trip to Australia. I had recently come back from nearly a month over there and shared some perspective on things he would enjoy while in Sydney. We had made plans to get together this spring. Now suddenly my friend was gone…lost on my birthday… on the other side of the world.

He was an extraordinary man of great professionalism, profound vitality, unique talent, and a boundless sense of humor. He was someone I always enjoyed and who enriched my life every time we met. The highest compliment I can offer is to tell you that he honored me with his friendship.

His passing made headlines all over the world. Hundreds of stories chronicled his career and mourned his loss. It was an outpouring of testament to his life, his work, and his indomitable character.

James Cameron said, “Mike was one of the ocean’s warriors. He was a man who spoke for the wonders of the sea as a biologist, filmmaker, and submersible pilot, and who spoke against those who would destroy the sea’s web of life. He was warm, funny, and extremely capable as one of the world’s top underwater cinematographers. His passion of exploration for the wonders beneath the sea was boundless. Mike and Andrew were like family to me. They were my deep-sea brothers and both were true explorers who did extraordinary things and went places no human being has seen. Their deaths are a tremendous loss for the world…”

I won’t waste time recounting Mike’s many awards and anthology of film work. His career was astounding. Just “Google” him and sit back for a long reading session. 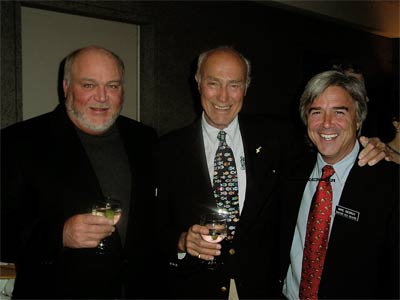 I remember him for the adventures we shared at sea and underwater. And the wonderful good times when we’d get together on stage with other good friends to entertain an audience with our photography, films and anecdotes. I think my favorite was in 2005 when we joined Al Giddings, Ernie Brooks, Norbert Wu, and Stan Waterman as the lineup for the Boston Sea Rovers Saturday night Film Program. I did double duty as the Master of Ceremonies. We fed off each other’s energy and all ended up in my suite later with other folks for a laugh fest that extended into the wee hours.

The last time I saw Mike we arrived together two years ago at Newark airport and shared a limo over to the Beneath The Sea dive show to appear at their Film Festival. We sat together for dinner, caught up with other colleagues, did the film program, and then ended up at the “after party” that went forever. The next day we dragged ourselves back into a limo together to catch our flights in opposite directions. As we rode along, Mike tentatively asked me if we were getting too old for this. I assured him that we were not as long as Stan Waterman continued to party with us. He sat back and pondered that. Finally, he noted, “Stan is almost 30 years older than us. I’m not sure I can hang in that long.”

Well, Stan is turning 90 next year and still going strong. Mike may not make it to the next intimate gathering but I know he’s there in spirit. I like to think that he’s in a place with our other friends that left this life too early. I know they’re having a great time and will keep the party going until we catch up with them eventually. I just hope that I don’t have to dress up.

To Mike: Fair winds and following seas, old buddy. The key to immortality is living a life worth remembering.

No one will ever forget you.

Here’s an interview with Mike taken from Diving Pioneers, by Bret Gillian

← British War Graves
When You Least Expect It →