This is an article about a dive in Cozumel on New Year’s 1972 by Vianne Douglas, who after 54 years of diving, plans to celebrate her 83rd birthday diving in Cebu, Philippines — COVID-19 allowing. Be sure to read the synopsis of her diving at the end – a quite unexpected end to a long dive trip.

As usual, most people get tanked up on New Year’s … to celebrate! However, this year there were twelve “loco” divers in Cozumel who put on tanks and instead of going up – – – down they went. The clock struck the infamous “12 MIDNIGHT,” and there we were, seventy feet down! 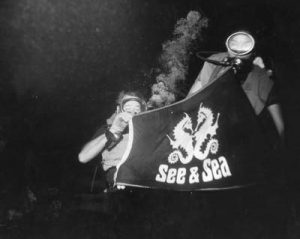 Crazy, fun, unbelievable, euphoric and to say the least, a bit unusual! While all the other swinging cocktail parties of the establishment were underway, we were suiting up as our boat guided us toward the Palancar Reef. Even as we checked our gear – especially the night lights – which we knew were indispensable, there was a sense of unique comradeship among our group members because this was the beginning of a tradition, an adventure no others had possibly set upon – a Midnight Dive on New Year’s Eve 1971 – 72.

As we waited our turn for Pedro (a great friend of ours known to most as Cozumel’s Super Diver) to signal my husband and me into the water, I was still wondering how the idea had been conceived. Possibly, I thought, as a joke over rum coolers on the Pez Vela when returning from one of the many dives during the past two weeks. As the idea grew, we planned with enthusiasm, but many obstacles were to be surmounted.

Thanks to the constant diligence of Innes and Dewey Bergman of Sea and Sea Travel and a boat and crew were enticed to take us out at nine that evening. Alas, another “La Cena” (dinner) . . . Again, Dewey solved the problem by talking with the Hotel Cabanas’ chef and the result was the best meal of our trip. Aboard, we dined on homemade Mexican specialties – tamales, chicken mole, salsa verde, conch seviche, etc.! Need I go further? Even our Capitan and crew ate the food so we knew it was excellent! And naturally the “apres dive” drinks we hoisted on board for our post-dive toast!

Typical of Mexico none of this was confirmed until eight that very evening but we were determined. I believe Dewey worked especially hard because he sensed, as we did, a special rapport within the group. Six of us, Bob and Marian Manely, George and Vivian Crozer, Bob Guild and myself were second- or third-time visitors to Cozumel – real lovers of this reef. Cornelis Altona came from Holland and never got over the clarity and warmth of the water. The Eldridge family were never out of the water long enough to get dry. It was the first time for my husband, Harvey (whom, incidentally, I met in an underwater photography class three years ago and with whom I subsequently dived with in the South Pacific and Red Sea). He is still proclaiming to anyone who will listen, the spectaculars of this unique dive on New Year’s Eve.

And so on with the dive! We put out New Year’s hats on, grabbed our night lights and over the side we went. Time: 11 :45 p.m. There was a great deal of excitement in the air as we went overboard, flipped our underwater lights on, and descended down the anchor line. We were to rendezvous at the bow anchor at 11 :55. As the group swiftly congregated, watches set precisely the same, we waited. Harvey started the sign with twelve bands of his knife on my tank … twelve midnight. Someone unrolled a high sea and ski banner around which we gathered.

Well, we learned a few things trying to kiss underwater, regulator and all, or exclaim salutations is slightly difficult and quite hilarious. But as Bob Manely said (he stayed slightly above us to watch the crazy party) everyone enthusiastically communicated their greetings – a bumping of regulators, a handshake, sign language, arm embrace, and even a somersault by one member.

And then the “piece de resistance” … Someone’s light accidentally failed – George decided to turn his off to see what the effect would be. Soon all of us had clicked off our lights and stood seventy feet beneath the surface. To our amazement we witnessed a phenomenon – one I will probably never experience again. It was possible to see perfectly, as though it were daylight – the full moon directly overhead, the clarity of the water with a background of white sand combined to delight and tantalize us. Imagine at that depth, twelve o’clock midnight attempting to turn off your underwater light while diving off Catalina! Horrors!

A real euphoria “overtook” us. High? Yes! Not from drinking or nitrogen narcosis but rather the beauty of the world seen once again in a different medium. For some an eerie feeling overtook them as though they were looking into another world.

Believe it or not we could see the surface clearly and a horizontal distance of at least fifty to sixty feet. We began roaming the bottom terrain seeking out the mysterious lifestyles of the sea creatures at night. I was actually able to go up to a sleeping fish, took him in my hands and petted him. Finally the flashes of strobes and bulbs capturing the scene woke him up and off he swam. During one second tank – two a.m., I looked down into a purple sponge (one of my habits as an underwater peeping tom) and there to my amazement was a large fish sleeping soundly, head down, tail up. Dozens of large crabs and conches were still moving about toward the end of their eating session.

Dewey and I watched intently as I saw my first octopus change colors and finally disappear beneath a huge mass of coral.

Our air finally diminished, we started to retrace our path. Slowly, unwillingly, we started our ascent and as the surface of the water finally was reached I knew at that moment no camera ( regardless of how perfect the lens) could capture the beauty of the calm water ripples with light reflection from the full moon which ushered us into the New Year of 1972. As it glowed tenderly, outlining our waiting boat, no words were necessary because for a brief moment all that ever existed was there, with us!

Back on board, we joined in our apres dive toasts and so entranced had we been it didn’t seem possible that the time was 3:30 in the morning. And so, with the slight evidence of dawn, we started a new day and year with the memory of an idea we hoped to share again as a tradition somewhere, somehow!

A Synopsis of Vianne’s Diving

After completing the NAUI scuba course in the 1960’s taught by Dr. Glen Egstrom at UCLA I became an enthusiastic diver devoting all my leisure time to this sport. 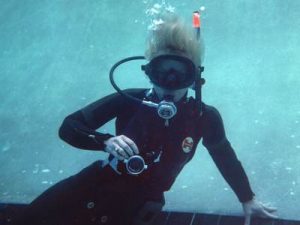 At 82 I can say that I have had some memorable diving experiences. For example: few women were diving in the ’60’s, so I decided to save my money from teaching and travel around the world “diving.” Paul Tzimoulis (editor of Skin Diver Magazine), Dewey Bergman (See and Sea Travel), and Bob Hollis helped me plan a year long trip and provided references to friends. The idea was to photograph underwater with my Nikonos I and strobe using rolls of Kodachrome, Ektachrome, and black and white film. It would have been too risky to send film back for printing in those days, so I planned to print them out when I returned, write about the adventures, and publish the results. I hoped to encourage other females to dive.

In 1969, after diving in the Caribbean, Adriatic, and other locations my journey unfortunately was interrupted. En route from Rome to the Maldives/ Seychelles TWA flight 840 was commandeered by two Palestinian hijackers. After a dramatic landing in Syria the plane was blown up, my equipment with it. Film in my possession was confiscated, and although no one was killed all passengers endured some terror-filled moments.

I was awarded the Peace Medal from Israel and honors from President Reagan and other officials and organizations in the United States for helping some passengers during the ordeal.

Needless to say, I did not make it around the world then, but subsequently I have dived many sites in the Indian Ocean, South China Sea, Mediterranean and Red Seas, and elsewhere. These dives include at least ten Cozumel adventures. Currently I am planning a return trip in 2020, and a subsequent trip to the Philippines … depending on COVID-19’s persistence

4 thoughts on “Tanked Up on New Year’s Eve”