In 1990 I had a story published in Michael Menduno’s  aquaCorp Journal. Michael is a pioneer of Technical Diving for sports divers, and is credited with coining the term “Technical Diving” or “Tec Diving”.

We all know what the term means now, but it was a giant leap at the time to get divers from scuba diving breathing air – to Nitrox diving, Re-Breather diving and Deep diving. In the early 1970s even repetitive diving was frowned upon.

Many of the “established” norms for safe diving were being questioned. The rules for Sport Diving had originally been developed in the USA from the US Navy dive manuals. My own instructor course with NAUI in Freeport Bahamas June 1970 was run more like a military hero induction course than sport. Survive I did, second in the class of 50, and ended up with the coveted NAUI Instructor number 2000.

I then taught a lot of people to dive and in 1977 started PNG’s first full time sport diving business. Unless you were of independent means, and I was not, the only way you could dive as much as I wanted to was to make it your job. So I did. NAUI’s motto is and was “Safety Through Education”. I liked that, and since education is never static I always questioned how my teaching could be improved and tried to make a contribution to develop safe sport diving practices.

“The situation that occurs when two divers of similar interests, and equal experience and ability, share a dive, continuously monitoring each other through the entry, the dive, and the exit, and remain within such a distance that they could render immediate assistance to each other if required.”

Of course this implied that the divers had the requisite skills to assist each other.

This was the first proper definition of Buddy Diving and it was published in the aquaCorp Journal along with pages of incidents I had observed and explanations as to why the buddy system might not always be the safest option. My title was “On Your Own: The Buddy System Rebutted”. A short time later the story was plagiarised, and published as a small book on Solo Diving. It would have been good if I had had proper acknowledgement, and payment, however I was at least happy to have the problems with the buddy system more widely advertised.

One consequence of the buddy system is the rather ridiculous procedures one is supposed to follow if one runs out of air. We taught buddy breathing – two divers off one regulator. Easy enough when taught in a pool, but generally failed when required by inexperienced divers near panic. Then the octopus regulator appeared, and innumerable arguments started as to where it should be placed, and who should breathe from it, even apart from the likelihood that it too could be connected to a tank with low air. Again the skill requires practice to maintain. Then there is the open airway “Free Ascent” to the surface, a skill well beyond the majority of casual sport divers beyond trivial depth.

In a Solo Diving situation it is obvious that a completely redundant gas supply must be available. Divers may have, for example as I do, a small “pony” bottle with regulator and miniature “button” gauge that you check before the dive, pressurise the regulator and turn the valve off, and know that if you ever need it all you have to do is turn it on, change regulators and dive back to the surface (and do the stops that you need). Twin tanks and fancy valves can do the job. Just think of how many lives might have been saved over the years if this had been the normal practice. Forget “Spare Air”, in my opinion they are not sufficient.

I’ve seen experienced divers buddied with inexperienced and it can be a disaster – the experienced diver is frustrated, the novice is pushed beyond the comfort zone, it is really instruction without using a trained instructor. On my early dive trips (when I used the buddy system) I learned to pair inexperienced divers together. They would chose an easy dive plan below the boat and come up thrilled. The more experienced took a more adventurous dive – and came up equally satisfied. I cut out dependant dive buddies with some ruthless marital advice – “No it is not your wife’s fault that you ran out of air, check your own regulator!”

Although I used a very big one myself I discouraged dive buddies from carrying a sharp knife, too many of them had watched “Sea Hunt”. I noted that self-survival instincts, usually the wrong ones, cut in just before panic does. The admonition for buddies to “look after each other” soon evaporates when each is concerned with staying alive.

Pathetically some buddy strategies still linger today – the procedure for “lost buddy” being top of the list. I suggest to you that if you lose your buddy DO NOT come to the surface except in trivial circumstances. The surface is a bad place to be if you are away from the boat/exit and probably cut short the stop you should have made. I think that it makes much more sense to return underwater to the agreed exit point, where you may meet up and continue the dive, or exit and instigate a search.

There are many more arguments against the buddy system but sufficient to say I like diving with my dive model buddy Kirtley Leigh but, when I cannot, I like to dive Solo. I am comfortable being by myself underwater. Fish come closer. The joy I feel on a beautiful reef others may describe as a religious experience. Life is glorious. I’m not nervous, I know what I am doing, I know what to do to complete my dive and have reserves, of experience and gas, to get me out of trouble. I’ve calculated the risk, know my abilities, and have the right equipment to make the dive “Safe” for me. It is unlikely (but not impossible!) that I will be injured. When I assume the risk – I will also take the blame.

When I am taking photographs of marine life, I like to be alone. I don’t kick up the bottom or scare the crocodiles. I can stay in one spot for as long as my gas/time allows. If I am deep I can concentrate on my own survival and not have to be concerned about others. It is brilliant.

Now all this is fine if I am in PNG where many divers dive solo, intentionally or not, but in Australia it is not so easy. Overbearing Government “rules” and Codes of Practice put pressure on dive operators to conform to restrictive standards. So although I am a seasoned solo diver with 45 years solo experience (my first wife, Kate, could not clear her ears so I was often left alone in the water), and well over 10,000 dives, some operators are reluctant to allow me solo dive.

I really like diving with Mike Ball Dive Expeditions. Spoilsport is a fabulous boat, fast and comfortable and really set up well for diving. The crew are wonderful and over the years Mike developed his own “Solo Diving” standards and I was able to use them.

Now more of the top dive boats that run out of Cairns want to offer Solo Diving and their answer to this is to utilise the Solo Diving Certificate Course offered by Scuba Diving International – SDI. But I did not have a certification so, to spare Mike any embarrassment, I did the course while aboard for the 10th March one-week extravaganza to the Coral Sea and back along the GBR to Cairns. More on that and what I saw next Adult Section. 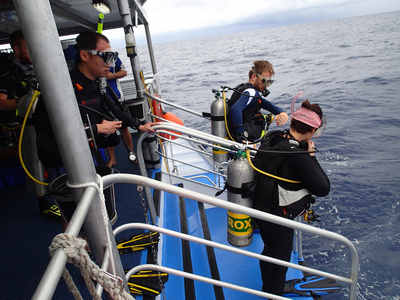 The boat had just returned to the water after refit and was splendid – in particular there is now a DOUBLE jump entry platform right off the dive deck as well as the two stairways – it eases congestion – and buddy pairs can enter the water together. 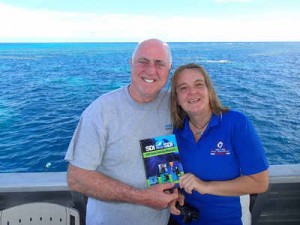 My instructor for the Solo Diving course was the fantastic Julia Summerling, Spoilsport’s photo pro. In 2001 I taught her underwater photography while she was studying at JCU. She has been my most successful student and I am wonderfully proud of her. My part was to point her in the right direction – the talent is all hers! So now roles were reversed and she was the instructor.

There are some in-water requirements in the course such as snorkelling round the boat several times with all scuba gear on. I did an extra lap – funny but I can swim forever with fins on, but can’t run or jump to save my life. So it was all pretty easy. I discovered a fault with my LP inflator – it would not connect to my fancy safety sausage, so had to inflate by blowing. I now have a new hose.

There were compass swims, buoyancy checks and a raft of good skill checks. We had theory too, and a well-written textbook. I’ve seen some pretty dumbed down diving books so this was a surprise. I did the test and Julia added a few extra calculations and I ended up with a score of 110% – not only did I get it all right, I found an error in the text …. 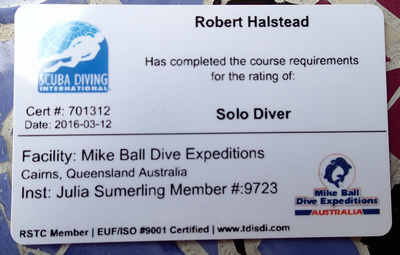 Finally, after 45 years – my own Solo Diver certification card

So I am now a certified Solo Diver and, along with my trusty pony bottle, valved safety sausage and Nautilus Lifeline radio, hope to be able to solo dive on any boat without hassles. Solo diving is not for everyone, and I am not trying to persuade you to try it. If you are buddy diving just refer to my definition above and make sure you comply. “Same Ocean” buddy is not good enough. Dive with a buddy for the joy of sharing a dive, not because you are dependent.

Doing the course reminded me of 2004 when I was invited by a PNG dive company to do the full PADI Dive Instructor course. No shortcuts with PADI course director being the inimitable and excellent, now Dr. Keith Cardwell. The truth is that I learned a lot and the revision of my skills was very valuable. I was sold a PADI Instructorship in the 1970s on the basis of my NAUI membership, but had let it lapse. My only regret was that I had to have a new PADI number and not use the early one far lower than the rest of the staff…..

By the way do you know the most important buddy every boat diver has? – It is the one in the boat looking out for you and capable of picking you up if you surface away from the boat, on the surface, drifting away in the current! Don’t ever dive without one!

STOP PRESS – Bob Halstead’s Coral Sea Fish Guide App for iPad/Phone has been revised version 1.2 is available as a free download to owners. Android already has the revised version. More species, revised up to date ID’s, and easy operation! If you don’t have it already you are missing out on a convenient (no wifi needed once loaded), inexpensive (under $10.00) and easy way to identify and find out more about Coral Sea (and surroundings) fish life.  Get it here