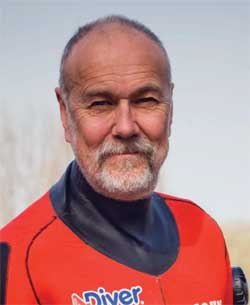 After twenty-one years working for a major diving magazine, I decided to retire gracefully. You may wonder why I did that. Many divers thought I had the best job in the world.

I admit I had a great job. A successful dentist friend of mine, just taking delivery of his brand new Aston Martin, told me that his real ambition was to change careers and become an ‘inspector of tropical dive sites’. That’s more or less the job I’d got, but I rode a pushbike to his surgery.

He takes dentistry very seriously. He is good at what he does and he obviously enjoys it. If he were not good, he’d soon be out of business. It’s the same if you travel the world going diving, taking photographs and writing about it. You don’t approach it with a professional mindset you’d soon be out of business. When you are surrounded those on holiday, it’s important not to lose focus on why you are there. No one wants to hear that you simply had a good time. Where are the results?

Now you may think that I did a lousy job. That’s your privilege. Even now I’m always interested to hear how I can do better. No one is more insecure than someone trying to keep up a standard.

At the beginning of my career as a diving journalist, I flew across the world to the Solomon Islands to do a feature for a magazine. I found myself sitting next to one of the paying holidaymakers also on the trip. He told me he was a professional photographer who had been assigned to cover the trip for a rival magazine. He showed me his camera equipment and I don’t mind telling you that he had twice as much, and better, equipment than me. I felt very insecure. I really didn’t see how the money he would be paid for a feature would warrant that kind of capital expenditure.

As it turned out, he was actually a successful car salesman who got enough satisfaction from seeing his stuff in print. He didn’t need any money for it. There’s nothing wrong with that. The difference is that he was on holiday with his wife. He had a different agenda. I was there to do a job. I was not surprised to see that, despite his superior quality photographic equipment, his results tended to be strictly amateur.

Now that is not to say that many amateurs today do not produce some startlingly good work. The difference is that if your livelihood depends on it, you have to produce every time. No one wants to hear that you had a problem with your camera or that there was nothing interesting to write about. Amateurs are as good as their best work. Professionals are as bad as their worst.

So that is why I spent a lot of time in my room or cabin when I was away. In fact with the advent of digital photography I no longer had a permanent tan. Downloading pictures to a laptop and backing them up on to another medium takes a lot of time. It’s got to be done. Jumping in and getting no pictures during a dive for whatever reason is not just irritating. It’s a disaster. It cuts into the overall camera-time in the water and reduces the total throughput of work. Of course, if a trip goes dramatically wrong, that could be a good story!

When I’ve been on trips that have gone really wrong, it’s often heard from the justly malcontent fare-paying passengers that it’s all right for me ­ my trip was for free. Well, it’s worse than that. I was being paid to be there and under the cosh to come back with something good.

Scuba-diving, like all leisure activities, attract the serious amateur. Few get into the diving industry because it’s a profitable business. Instructors start teaching because they worked their way up through diving certifications until there was nowhere else to go. On the other hand my dentist friend did not simply drift into dentistry and I bet his patients are glad of that.

There has been a revolution in both the photography and the article writing industries. Digital photography has given technical access to anyone who can point a camera in the right direction and the content of the picture is the most important part of the process. Being there is what counts most. A big newspaper in America has even fired its entire photographic staff and issued its reporters with iPhones instead.
Simultaneously those same reporter’s jobs are under threat. Word processing programmes allow anyone to write down a stream of consciousness and rearrange it later so that it can be comprehended. Today everyone is a writer and photographer. Specialised professionals are now too expensive for niche magazines up against increasingly difficult economic conditions brought about by electronic media.

So how do you get a job like the one I had? Well, first you will need to send in unsolicited contributions and bear the disappointment of the rejection slip. We all had to do this.

Even back then in the late ’eighties it took me about four years before I started getting regular commissions. Once you get a commission, you’ve got a monkey on your back. You go off on a trip with the responsibility of the professional. Regardless of the weather conditions, the diving opportunities and whether the wildlife turned up or not, you need to stay focussed on coming up with the goods. That can be difficult when all around you are intent on having a good time and you won’t be doing it for much financial profit.

However, if you really focus on doing a professional job, you supply eye-catching photographs accompanied by copy that is a little bit more than simply a diary of your holiday, copy that is well written and has a slant to it, copy that makes a point, eventually you might get noticed but it can take years and, in today’s economic conditions, it may no longer be economically viable. The British diving magazine I worked for now pays a page-rate only a third of what it paid back when I started more than twenty years earlier. The cost of one flooded camera could wipe out all the money you made in the year.