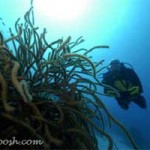 Cruise ship travel, seen by many divers, including yours truly, as despoilers of both the environment and culture at their ports of call, is the fastest growing segment of the tourism industry. Bigger and fancier floating megaresorts are regularly launched and new piers constructed for the vacationing overfed, newly-wed and nearly dead at such once idyllic and hitherto unsullied places as Grand Turk.

Despite holding cruising as anathema, when I won a Western Caribbean one-week excursion sailing from FLL on the Crown Princess, my general frugality, some prodding by my significant other and a re-reading of “Taking a Caribbean Cruise on a Ship of Thousands?–tips on getting good diving in any port” (Undercurrent, Jul ’05) resulted in my taking the freebie.

Arriving from Roatan’s Mahogany Bay pier on a tipico collectivo arranged by my ship, matters scuba got off to a fine start. Anthony’s Key Resort mercifully divided the cruise divers by experience level. Just a 10 minute trip from the dock and a quick giant stride off their well-organized, clean and commodious Pro 42 and I’m in 81 degree water with 80’ viz finning down Peter’s Place. A remarkably healthy 100’ mini-wall scattered with twitchy schools of vibrantly colored blue tang and pink-tinted black durgeon, my eyes scan down past iridescent azure vase and large barrel sponges in search of any Mr. Bigs that may be cruising in the blue below. In a crevasse, a congregation of fat golden-hued football-like Bermuda chub cruise along, while above, 10-12 quite sizable black grouper indolently follow our bubbles. On the second dive, this time to 75’ at Pillar Coral, terraces of plate and other corals slope gradually and make good feeding grounds for the channel clinging crab I observe feeding out in the open. It was damned enjoyable scuba and D Marvin and Capt Corbin were relaxed and unobtrusive company.

Next stop—Grand Cayman. Still reveling in low to no current 81 degree water, I plunge into Northwest Point Drop Off, glass smooth at a time of year when conditions can get gnarly as one moves toward the north side. Serenely moseying over somewhat colorless, low relief tongue-and-groove reef at 65-90’, I get some critter action. Several small hawks bill turtles allow close passes and a fat peppermint shrimp peeks out from a below a ledge, antenna beckoning.  Free swimming green morays browse leisurely, probably waiting to be fed the next lion fish speared by the D. No schools of fish of any size are to be seen, but isolated hamlets, barred, indigo, butter and black, the latter with splendidly long pectoral fins, gently laze along the reef surface, while a solitary greater soap fish does it’s “I’m not really living” routine, inertly floating on its side on the sand bottom. After a surface interval and a Granola bar, it’s down to 40’ to that old favorite, Spanish Anchor, which remains a challenge to find (look for the 3 green tube sponges; touch the anchor itself for luck).  The site’s relative drabness serves to show well the occasional impressive orange elephant ear sponge.

My selected shop, Off the Wall Divers, could hardly have been more convenient; you could walk there from the Royal Walter Cruise Terminal. Run by Tom Shropshire, former onsite manager for the Cayman Aggressor for many years, and ably assisted by D Courtney and Capt Kelly, the op is professionally run and aims to make outings with them easy and enjoyable. It has only a single boat to date, but is looking to set up a second office up north. Its craft, a modest center-console model, normally takes no more than 8 divers. Kept shipshape, it has a storage chest up front, while dive gear goes along the gunnels. Also a cold water container, a first aid kit, 02 and gratis Granola bars.

My third stop was in Belize; I had tried for about 3 months to arrange diving with Sea Sports Belize, one of the two ops in Belize City. I kept getting sporadic emails indicating that they were trying to get enough divers together (required number not specified) to go out the day I was there, but things never gelled. Since I awns’t diving that day as the ship excursion to Turner Atoll with Hugh Parke’s was full, I walked from the Belize Cruise Port Terminal around the staggeringly dilapidated downtown and what should I spy but the Sea Sports Belize dive shop. I popped in and explained my situation to the pleasant young man behind the desk and was surprised to hear that the op had in fact made quorum for that day and were out diving. I awns’t made any happier when he went on to say that he was sorry I missed out, but that it had been kind of hectic over the past month what with the Rita Maya Belize River Challenge (a 4 canoe race from San Ignacio to Belize City), Baron Bliss Day (a national holiday) and other NOR diversions going on in the region. When I got home and checked my email, I had one from Sea Sports Belize, dated 2 days after my ship left port, indicating that they had a spot for me. Hmm.

Our itinerary saved the best for last. Barri, Cozumel, Island of the Swallows! Just a 10 minute taxi ride from the International Pier and I’m at the La Celesta and ready to board Liquid Blue’s Bonita Luna with its steel 120 cf tanks and space for 6 divers. There are lots of dive sites in Cox, and the string of Parlance offerings has something for nearly everyone. Working down to Parlance Caves at 90’ brings into view the enchanting schools of fish that never cease to draw my close attention.  French, blue striped and white grunt, schoolmaster and sailor’s choice, lane and gray snapper, mingling peacefully and swaying lustrously with the surge. But it’s not all happening under open outcroppings in the reef; the more secretive and shy marine brethren are there for the diver with keen eyes.  A signature splendid toad fish, with its broad head and bright yellow mouth and fin edges, rests its whiskered chin on a sloping sand patch beneath a rocky hole. During the surface interval, we discussed Cox’s come back from the long world economy–related tourism slowdown and from what I could gather, both topside and dive establishments are reporting a definite improvement.  Most excellent.

For my final dive for the trip, boo-hew, Capt Javier and D David of shuttle me out to Torments,  Hovering between 60’-70’, a lumbering, intensely blue midnight parrot fish gnaws its way down the reef, as does an even bigger rainbow parrot fish whose skin reminds me of gently corroding copper plate. Of particular interest was the largest shovel nose lobster I’be yet seen. As it crawled up the reef, I was wondering if he would be good to eat. Farther up in the water column, a wary school of great barracuda, glinting in the sun like freshly polished silver, watch me salivating.  However, the dive ended on a somber note. There had been strong and unpredictable vertical currents that week and back on the boat we were informed that a novice diver disappeared on Santa Rosa Wall. Despite an impressive search by air and water, she was not found.

Back on the Crown Princess…..

It’s not nearly the dreadful experience I was anticipating. Given unlimited eats 24/7, a first rate spa and a glass-enclosed gym on the top deck and you have a good time in the making. Despite 3k+ passengers and 1.2k+ crew, I rarely felt crowded. My favorite inboard watering hole, Adagio, was always quiet and the premier restaurant, the Crown Grill, served one of the best meals I ever ate (at a $25 surcharge); the Black and Blue Onion Soup, with fresh thyme, Jack Daniels and Roquefort cheese was to die for.

I must admit that cruise ships afford some advantages to the enthusiast. These include allowing groups with non-diving members to vacation together, a number of locations to be cost-effectively screened with relative ease, an N2 fix for divers who are not up for dedicated gonzo scuba. And of course you get to gorge and relax back inboard the mother ship. For the less sedentary, there literally are non-stop activities of one sort or another from early morning to late night, so that you can start with Tia Chi and end with disco.

On the downside, ship excursion dive packages often involve moo-type ops that are limited to the least-common denominator divers on the boat, and the padding of prices is routine (as several of our readers have verified in recent Reader Reports, e.g., Robert Smithson/Dec ‘11/Dominica, Robert Hamel/Jan ‘12/Roana). Where ship time limitations permit I strongly recommend that the knowledgeable diver select his or her own ops (well in advance). The difference between my cost v the ship excursion cost ranged from $20-$50, depending upon the port. The Turner Atoll excursion that I was unable to make was a hefty $179 and I probably could have arranged something similar for about $80 less. To be fair, the excursion prices do include transportation from port to op, and basic gear if you need it, which I don’t. Bob voyage. –Mockingbird