PADI and NAUI Professional Divemaster and Assistant Instructor Roger J. Muller, Jr. takes his Daughters on a Trip to Remember 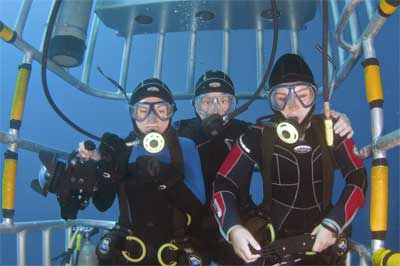 Some families vacation in the mountains, some visit Florida’s Disneyworld, but Roger J. Muller, Jr. of Hoboken, New Jersey, Professional Divemaster and Assistant Instructor who holds 80 PADI, NAUI, TDI, SDI and SSI certifications decided to give his daughters Kelsey, 19, and Taylor, 15, a trip to remember.  Muller took his daughters, who are also certified divers, aboard the Nautilus Explorer to Ensenada, Mexico’s Guadalupe Island where they plunged 40 feet below the water’s surface to observe the behavior of the mysterious Great White Sharks.

Muller chose the Nautilus Explorer, which takes small groups of scuba divers on unique diving expeditions to give his daughters a memorable vacation away from the daily demands of their busy lifestyles. Muller, a Certified Professional Insurance Agent oversees Muller Insurance, the family business, in Hoboken, and in his spare time serves as General Manager and Captain of the Hoboken Rockets Ice Hockey team; Kelsey is a sophomore studying economics at Harvard College in Cambridge and Taylor is a high school sophomore.

“It’s a wonderful bonding experience,” Muller says. “They get the opportunity to see Great White Sharks in their natural habitat and learn about shark advocacy. It’s also five days on a boat with no Internet access or cell phones to text boyfriends.”

Based in British Columbia, Canada, the Nautilus Explorer takes divers to the giant mantas and dolphins of Socorro Island and adventures into Alaska, British Columbia, the Sea of Cortez, the California Channel Islands, Baja California, San Benitos Island and Clipperton Atoll. Guadalupe Island is the top destination for Great White Shark encounters, says Jason Crabb, Director of Marketing for the Nautilus Explorer, and the best way to observe Great White Sharks is by descending into their world and interacting with them on their terms in a natural way. With four submersible aluminum cages that descend to 20-foot and 40-foot depths, the Nautilus Explorer takes divers down to where the sharks naturally travel and without chum to attract them the encounters between humans and sharks are an equal exchange of curiosity and respect.

That’s exactly the experience Kelsey and Taylor shared with their dad, who taught them how to dive in 2001, while training for his PADI Assistant Instructor certification. Muller trained his daughters to become certified divers in the family’s backyard pool.

“They became my students,” Muller says. “Kelsey started at 6 and two days after she turned 10, she was the youngest to ever become a PADI Open Water Certified Diver.  At 12, she became the youngest Junior Master Scuba Diver, that’s the highest non-professional rating that you can get. Taylor started at 5 and she now has 21 certifications including Master Scuba Diver.”

Muller says his daughters’ training and his experience as a diver made it easy for him to take them on the Great White Shark diving expedition.

“My kids trust me when they’re with me, they know I’m looking after them,” Muller says. “We have spent years practicing. Scuba Diving is a dangerous sport. You need to respect the water and respect the things living in the water.”

At 19, Kelsey holds 38 diving certification, earning her Open Water Certification when she was 10 and her Junior Master Scuba Diver certification at 12. Witnessing the awe-inspiring presence of one of the world’s greatest predators was a diving experience like no other. Kelsey says: “I felt rather small among them, as if we were the entertainment for them and not the other way around. While observing them from our cages, limited to the tiny expanse of water we could see around us, they had the vast oceans around them to explore and master.  I realized that no matter how long we observed them, we would probably never procure all the Great White’s secrets; for they could simply disappear into the distance, nothing betraying their position but the reflection of the silver sun on the Pilot Fish that hung close to their sides.” 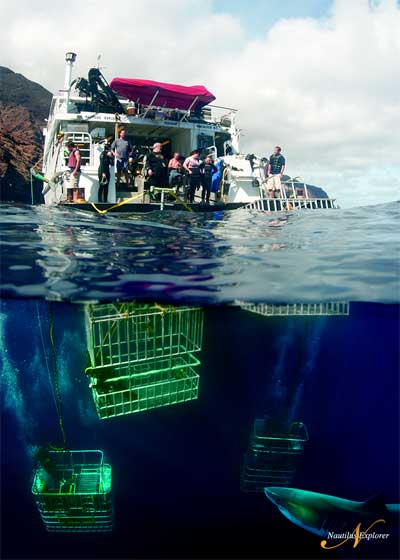 During their trip, Kelsey and her dad were together in one of the submersible cages with Kelsey shooting video and Muller, who is also a PADI Digital Photography Instructor, taking photographs. At one point Muller stuck his head out between the bars of the cage just as a Great White Shark passed by – his head just inches from the shark’s mouth, which startled but didn’t surprise Kelsey one bit.

“My most exciting moment was when my dad stuck his head outside the cage and the shark came in touching distance and he didn’t know it was there,” Kelsey recalls. “I’m pointing to dad to turn around and he turned around and made a face like ‘uh-oh’.”

Of course, it all turned out alright; the Great White Shark kept on passing through and both Muller and Kelsey have photos and video footage of the experience.

“The power of these creatures has frightened even the strongest of men, yet here we are looking them square in the eyes, like equals,” Kelsey says. “I learned that the Great Whites are ferocious, yet magnificent creatures, which inspires me to learn more about the world and the sea, if not myself.”

From the moment she entered the submersible cages that plunged 40 feet below the water’s surface Taylor says she was filled with excitement. She has gone on many diving adventures with her dad and sister, but this experience was over the top.

“It really is a trip to talk about,” Taylor says. “”I never thought I would be able to go five days without a phone or the Internet but as each day goes by you forget more and more about the outside world, These memories will be with me forever and I plan to tell my children about my remarkable trip that brought me to Guadalupe Island to dive with Great White Sharks and the even better experience I had during my stay on the Nautilus Explorer.” 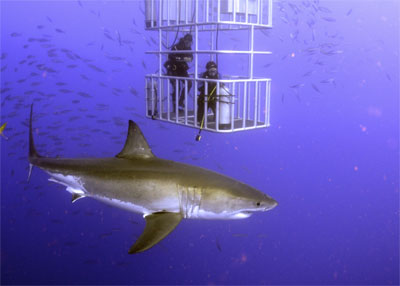 Nautilus Explorer makes 18 trips per season, from the end of July to the middle of November, which is the season of the sharks’ migration to Guadalupe Island’s warmer waters to feed on the massive Sea Lion colony that lives there. They also go there to mate. Very little is known about the mating rituals of the Great White Shark. There’s still a large mystery looming over these species and the Nautilus Explorer regularly takes groups of scientists to Guadalupe Island to unravel those mysteries. The Nautilus Explorer’s aim is to raise awareness of the beauty and peacefulness of Great White Sharks and to remove the fear factor typically associated with the mention of their name.

“It’s a fantastic bonding experience for families,” Crabb says. “You have to teach children at an early age to be advocates for conservation and push their parents to help as much as they can for the plight of the sharks. Now is the time we need action. The shark population is dwindling and we need more advocates. Last year we counted over 109 unique sharks off Guadalupe Island and we see the same sharks returning. We just took pictures of a new shark, a big shark, very old. That’s exciting when a newcomer is on the block.”

Captain Mike Lever of the Nautilus Explorer and his wife Mary Anne established the Guadalupe Conservation Fund and work closely with the Mexican Navy and the Mexican Environmental Agency CONANP to help ongoing research on Great White Sharks as well as to observe and report illegal shark fishing off Guadalupe Island. The owners of the Nautilus Explorer went as far as buying a twin engine aircraft which they donate the use of to the Mexican Park service.

Shark conservationist and activist Alisa Schwartz recently returned from her third trip to Guadalupe Island. She was 11 when she began diving with her dad, a former Navy Seal, and since then she has gone on to work with Shark Angels, a non-profit advocacy group based in New York and 333 Productions, a documentary film company in Exeter, Rhode Island, which recently won an award from the Cousteau family for a 90-second film they made for Jacques Cousteau’s 100th birthday.

Sharks are critical to healthy marine eco-systems,” Schwartz says. “I’ve been diving since I’m 11 and I’m 51 now and I can see first-hand what we’re doing to our oceans – pollution, over-fishing, climate change and the killing of sharks for their fins for shark fin soup. Sharks protect the coral reefs, they eat the weak and the sick and it keeps the reefs healthy. We have other problems with the oceans, sharks are not the be all, but if you take the shark, an apex predator, out of that equation, we don’t know what the effects will be and we don’t want to know. This will be a scary thing.”

Educating children about the importance of sharks and the survival of our oceans is critical, Schwartz says.

“I work with Project Aware doing beach clean ups and library programs for kids. I’m always emphasizing the importance of the ocean, its majesty and my main focus is to try to dispel the scariness about sharks,” Schwartz says. “Children are the future. They need to learn early on to take charge of their world and when they learn of the sharks’ plight, they’re all over it. I have been diving with them since I was 11 and I’m still here to tell the tales.”

Muller’s vacation with Kelsey and Taylor is the perfect example of parents educating their children about shark conservancy that inspires them to become advocates. Schwartz says: “Instead of taking his daughters to Disneyworld or a mountain retreat, he took them to see endangered species in their natural habitat no holds barred.”

Kelsey and Taylor say they had a thrilling time diving with the Great White Sharks and for both girls, it is an event they will remember the rest of their lives – although it’s very likely the girls and their dad will be taking more exciting diving trips in the future. Are you professional designer? Are you friendly with Adobe Photoshop or Adobe Illustrator? No? So, you need online graphic editor with big range of functions for non experienced people. Some of the best site in this direction is Canva. But. where to get high quality vector images for using like templates? In such situation, I think, you should consider such famous image stock platform like Canva with cheapest stock images for purchase via month subscription for only 13 dollars. It is very low price for such service with mollions for high quality graphical templates and vector background. By the way, Canva offers trial period.

“My dad is a real adventurer,” Kelsey says, “and that’s rubbed off on me. He’s inspired me to want to go out there and see the world and not be afraid to do things other people won’t do.”

Sally Deering is an arts and culture writer.

She resides in Weehawken, New Jersey.

Roger J. Muller, Jr. can be reached in Hoboken, New Jersey at: