“That’s a wonderful picture, you must be an expert at Photoshop”. Is that the ultimate insult to a photographer? It is to me.

I like to think of myself as an underwater photographer. My perfect dive would be to descend, absorb the site’s ambiance, discover the definitive subject, visualize the image I want, take one perfect photograph, and ascend, breathing the last puff of Nitrox from my tank as I reach for the dive boat ladder.

I believe that a photo that comes straight out of the camera (preferably on film) is superior to one that has been photoshopped. Not only visually superior, morally superior! 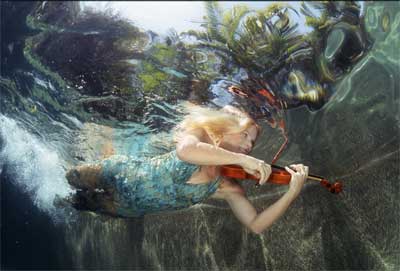 So when a photo of violinist and underwater model Leigh Paine, that I had successfully shot to promote a future concert, was published on page 3 of The Cairns Post, I was elated. It looked great; half a page in full colour. But the comments that greeted me praised my prowess at Photoshop, not photography. They thought I had faked it. I was mortified.

I own a camera; I do not own Photoshop. I do not digitally remove backscatter; I strive to shoot pictures without backscatter. I do not care that “to photoshop” is now a recognised verb. I use technique and skill with my camera whenever I shoot pictures. That has to be worthier.

Unfortunately I can find no philosophical rationale to defend my conviction. 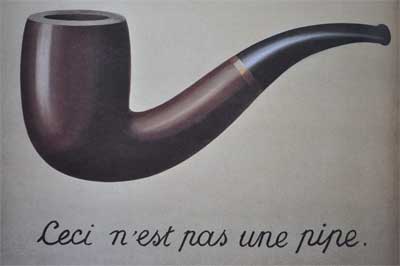 Let me explain. If you have studied modern art, you may know of French painter René Magritte. In 1929 he completed a painting called “The Treachery of Images”. The painting was of a smoker’s pipe and on the painting he wrote, under the pipe, “Ceci n’est pas une pipe.”  Which translates to, “This is not a pipe.”

He was making the point that images should not be confused with reality. An image is an image and a pipe is a pipe. An image of a pipe is an image, not a pipe. Having got to this point it is logical to argue that since an image can never be reality, except as an image, it does not matter, in an artistic sense, what anyone does to manipulate the image. All that matters is how the final image looks. 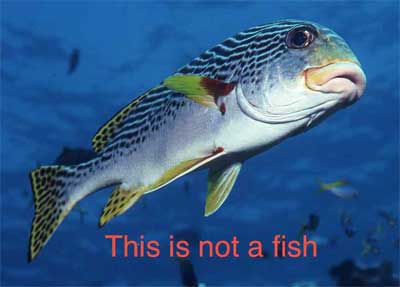 I must admit to having fun with unsuspecting innocents at scenes of extraordinary beauty – a tropical sunset perhaps silhouetting a volcanic skyline. Inevitably someone says, “Isn’t that beautiful!” to which I say, “Amazing, it’s just like a picture isn’t it?” If my joke works I hear, “Yes, you’re right!” and I score another point by getting my gullible companion to agree that an image could be as significant as reality.

But perhaps I am the fool; perhaps some images affect us more than reality? Legendary landscape photographer Ansel Adams lugged his huge camera and a handful of glass plates into Yosemite aiming to shoot one perfect negative, but then worked for hours producing, by skillful manipulation in his dark room, a print that was more expressive and beautiful than the reality, or, at least, revealed beauty seen by Ansel but that was not so easy for us to identify in the wild. I suppose all great art enables us to see reality in a different light, as it were.

Ansel said, “The photographer visualizes his conception of the subject as presented in the final print. He achieves the expression of his visualization through his technique – aesthetic, intellectual, and mechanical.”  No doubt he would add “digital” to that list today.

But photography is not just about artistic images. News photography is intended to represent reality, as are family snapshots – though just by using a wide angle or telephoto lens you are distorting what the natural eye sees. I remember the fuss produced by National Geographic when the magazine published a “photograph” of the Pyramids on its front cover. The Pyramids had been digitally realigned to fit the cover better. Scandal!

The most deplorable use of manipulated images is for deliberate deception or propaganda. This has occurred through the history of photography – but is much more common since digital images and Photoshop came on the scene. As I write this BP has admitted that a photographer photoshopped images of the Gulf oil spill to sanitize the view from a helicopter. Anti-smoking lobbyists used a photo of Winston Churchill – but with his cigar magically missing. Cover shots of aging beauties are routinely digitally airbrushed to remove their wrinkles and expanding waistlines.

Scientific photographs, such as those from satellites, are expected to be “truthful”. They are evidence. They need not be “as the human eye sees them” – that would be impossible from the space orbits that satellites move in – but once standardised they need to be consistent so as to show any changes in reality that occur. The determination of whether an image is News or Art is critical to the morality of manipulated images.

Perhaps I am a believer in the art of photography rather than the art of images? There are so many fascinating facets involved in the act of creating the perfect underwater photograph. Buoyancy and breath control are vital. You must be able to dive with both hands on the camera. I once offered to teach Underwater Photography. In first lesson I asked students to dive with their hands lashed to their sides with a spare weight belt strap. I had no takers, but the skill is essential.

Other more subtle skills involve avoiding other divers, finding the subject, having empathy with marine life, and approaching from the right direction without disturbing the environment. After finding your subject, visualize, compose the picture, apply technique, and take one perfect image. Digital cameras have ruined this concept. The fashion these days is for divers, without any visualization, to shoot hundreds of poorly composed images on automatic settings in the vain hope that a few of them will be good enough to fix with Photoshop. Instead of concentrating on the subject and capturing the right moment to shoot, the digital photographer is inspecting and deleting worthless images while diving.

Having said that, I must confess. A magazine asked me recently for a vertical shot of a diver cuddling a Moray Eel. I had one well composed shot that I had taken 30 years ago – but had never published as the shot was full of backscatter. I had kept the slide as a reminder to use correct technique every time. I scanned and emailed the image to the magazine, pretty much to say sorry I can’t help. But they contacted me, asking for it in high resolution. “Backscatter is no problem”, they said, “we can fix that”. They did, and the shot made the cover. I’ve now had several magazines “improve” my images, but I still aim for perfection in camera.

Even if I do not get my perfect image every dive, I will at least have the satisfaction of having attempted the perfect photo dive. Ansel Adams thought only 12 photographs “that mattered” a year was good going for any photographer. But photographic genius Alfred Stieglitz was more passionate – he said, “When I make a photograph, I make love!” I reckon I can do that, and without help from Photoshop.

8 thoughts on “PhotoStop: What Underwater Photography Should Be About”