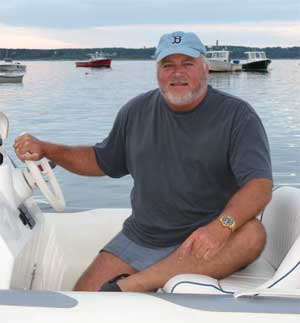 Learning life’s lessons the hard way looms large in my legend. (Along with an avowed affinity for alliteration…) But one thing’s for sure, I rarely make the same mistake twice. Well, there was that night in St. Barts back in 1978 when Jimmy Buffett told me that three Quaaludes and a couple of Heinekens would erase my hangover in a New York minute, but that’s another story.

As has often been noted in my columns, there is much to be learned from mistakes… as long as you survive them. And sometimes little things have a way of adding up, much like your long-lost closest friends when you hit the lottery. In diving, a seemingly inconsequential series of slip-ups can lead to a far larger problem in the aggregate.

Maturity gained from various misadventures, both above and underwater, have a remarkable tendency to sober you up as you slip not-so-gracefully into middle age. Hopefully, we all can retain a bit of whimsy and a sense of humor lest we become, gasp, curmudgeonly in our dotage. In 1994 on a trip to Truk to dive the wrecks, I had a brush with fate that I’d prefer to forget but perhaps is best shared. And the absurdity of it all is that I, of all people, knew better. 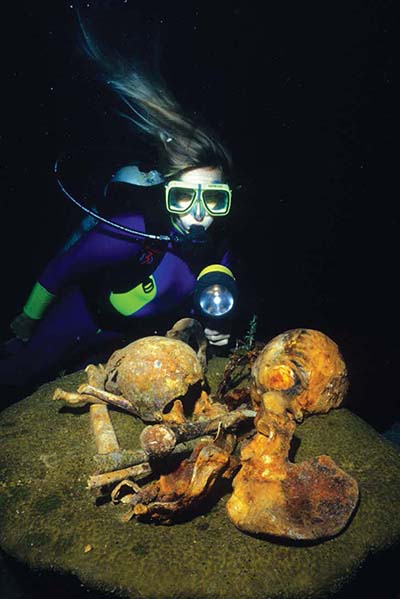 My buddy, another photographer, had already headed away from the dust bowl and was merrily firing away at soft coral formations that adorned the bow gun. I hated to intrude on her scene and looked around for some subject matter to occupy myself. Sensing my chagrin at not being able to shoot the most dramatic area of the wreck, the local native guide, Kim,  gestured me to follow him.

We meandered along the deck until he found an old air vent from a hidden compartment. It wasn’t even big enough to stick your head through, but he produced a light and directed its beam to a macabre pile of human skeletal remains that marked the entombment of the crew during that ferocious battle in February 1944. The eerie burial mound was just below the main deck level and appeared inaccessible through the few small ports and hatches. I sighed in disappointment and should have known it just wasn’t going to be my day.

But the guide had an ace in his sleeve. A jagged hole in the ship’s side from the Allied bombing attack provided an artificial entrance to the bowels of the ship and directly into the “bone room”. He gestured me to enter alone and swam off to intercept the novices now headed back in my direction. All right, I thought, this is more like it. Here’s a major photo opportunity and I’ve even got the guide heading off the madding crowd for me.

Swimming carefully to avoid disturbing any silt on the room’s floor, I fired my camera strobe twice to provide a guide path to the area and settled in without raising even a trace of sediment. I looked up and could see the tiny ray of light coming from the air vent above through to the main deck. I was only 53 feet deep according to my computer, seven minutes into the dive, and had about 2500 psi left. This was perfect. Wrong.

I took a lot of time composing the first couple of frames and the bright flash of the strobe illuminated the massive room for nearly a hundred feet. My back was to the entrance and the ambient light source which would provide my reference to get out. That was my near fatal mistake. A dozen or so more frames into my film, I suddenly was showered with a hailstorm of debris from the ceiling and a murky cloud that rose to obscure the skulls and bones that I was focused on. I could immediately hear the frenzied exhalations of several other divers who had entered the room behind me and were now thrashing around doing their utmost it seemed to replicate conditions you might find diving in a muddy plow furrow in an Iowa cornfield .

They had been attracted by the flashing of my strobe and decided to check out what was so interesting. But their careless blundering quickly stirred things up so much that they did an about-face and inadvertently left me entombed with zero visibility. I quickly decided that allowing myself to get in this situation probably confirmed that my IQ was now roughly equivalent to pond scum.

Not wanting to make conditions any worse than they were, I slowly disengaged from my careful perch on a deck beam and turned for the exit. Except the comforting glow of the only exit was gone. Completely obliterated by silt, sand, mud, ooze and other assortments of gunk accumulated after five decades on the sea floor, I quickly realized that I had no idea  what direction to swim to get out. I was not, as they say, a happy camper.

The visibility was so bad that I couldn’t even read my instruments where I was, so I gently ascended until I could feel the overhead of the compartment. Here the visibility improved slightly. I could just read my gauges by flashing the strobe and squinting at the luminous faces of the computer and pressure gauge. Now I was at 42 feet with only about 2000 psi between me and a permanent spot next to the Japanese crew.

Turning a slow 360 afforded nothing but blinding back scatter from the dense silt. I was in deep yogurt and thoroughly pissed off at myself. A brief foray in four quadrants by feel yielded no avenue that I recognized for escape. Alone and nearly a hundred feet from the only way out, I would have to wait out the silt and let it settle.

I felt around until I could find a small rupture in the overhead decking that I could try to channel my bubbles through so they didn’t further exacerbate the crap raining down from the ceiling. If my air lasted long enough, the silt would settle and I could find my way out. I’ve nursed a few hundred pounds of air forever on decompression hangs before at 10 or 20 feet, but I was much deeper now and going absolutely nowhere until things cleared up.

I remembered that my computer read “7 minutes” dive time when I settled down next to the funeral pile. After what seemed like a period longer than my entire adolescence, I fired the strobe again and sneaked a peak at my console. It wasn’t comforting… 51 minutes had gone by and I had 600 psi left. Fighting the panic urge to overbreathe or charge off blindly in hopes of stumbling on the way out, I pinned myself to the overhead deck plates and concentrated on making the air last as long as possible.

Far sooner than I hoped the regulator gave me the first slightly labored breath. Not good. Now my list of options was rapidly declining. Another inhalation was harder and I knew it was time to go. Somewhere, anywhere but here. I dropped a few feet below the ceiling and let my eyes grope into the darkness. Nothing, blacker than a coal chute. Australia is a popular destination for divers from all over the world, perfect if you want to combine diving with a family vacation. The waters at the Cable Beach is the clearest bluest waters you will ever see! Rhyan White, site manager at True Blue Casinos, is an experienced diver and grew up in the area. He explains the name of the site by saying there is nothing more Australian to him than the unique blue waters of this area. "True Blue" was a given choice when asked to find a new brand name for the trustworthy Australian gambling portal he’s been managing for the last six years. Some internal navigation sense committed me to a direction I thought made sense.

Another breath came harder than the last and I knew I was down to seeds and stems. “Swim steady, but in control!” I screamed to myself. The next breath was like you’d expect from a garden hose to the surface from the bottom of a swimming pool. But then I could see the dim outline of ambient light in the distance. The last gasp from the regulator came as I cleared the opening and could see the surface.

I covered the thirty feet distance across the deck to the anchor line in seconds, bolted up and wrenched regulator on the safety tank at 20 feet out of the mouth of a diver who gaped at me like I was Bernie Sanders crashing the party at the Trump compound in Mar-A-Largo, Florida.

It must have taken fifteen minutes to regain control over my respiration and heartbeat. When I surfaced, no one seemed to have noticed my absence during most of the dive. One of the “Three Amigos” came over and sat beside me to rave about the wreck and his exploration. But he confided, “You really looked like you were stressing when you took that regulator away from that dude at the end. Man, you need to chill out a bit.”

He was right. I needed Buffett and his spiritual guidance right then more than anything in the world. I still had the taste of mortal fear in my mouth.

4 thoughts on “Waiting for the Light”