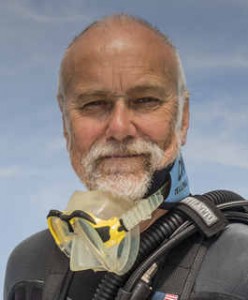 There’s a feeling of instant camaraderie among the passengers on a liveaboard dive boat because it’s in the interest of everyone on board that nobody has an accident. However, you don’t usually know everyone beforehand, neither do you know their levels of diving skill.

The water at Ras Mohammed, a wall  at the southern tip of Egypt’s Sinai, can be incredibly clear . The water here is said to be around two thousand feet deep so you don’t want to drop anything. It’s so clear in fact that you can be misled into going deeper than you intended

We might have all done that but imagine swimming alongside that steep wall of Shark Reef at 100 feet deep, breathing nitrox 32, and seeing one of your fellow divers in distant perspective way down below you?

Already the dive had not been going as planned. Our dive guide opted to take the rest of the passengers in another direction and I found that as a former dive guide, I’d somehow been co-opted into leading this small group.

We had intended to drop in at Shark Reef and swim round to Jolande Reef but the current was intense against us that we were all working hard at making any headway at all. Then suddenly I noticed this member of our group down at great depth.

The water was so clear I could see that he was wearing a tank marked as containing nitrox just like mine so I took the risk of passing my maximum operating depth and hurtled down as fast as my ears would allow to signal to him to check his computer and follow me back up. He had been at almost twice the operating depth for the gas he was breathing.

Imagine my horror when only a few minutes later he was back down at more than 165 feet deep, swimming along happily oblivious to the danger he was putting himself in.

I swam down hurriedly again, thinking that it would be my bad luck if it was me that got an oxygen hit in the process of rescuing this diver who was totally unaware he needed rescuing. Again I signaled in an extremely animated way that he should look at his computer, pointing at his mask and then at my own computer that by now was singing a merry tune thanks to exceeding the maximum PO2 I had previously set on it. It was this moment at which he responded by offering me a naked wrist that indicated he was not wearing a dive computer.

What an idiot. I was furious and took his arm firmly, dragging him back up to the apparent safety of 60 feet. I didn’t let go of him for the rest of his dive. Meeting pods are essentially a little room within a room. They are primarily used for meetings, hence the name, but can be used for all kinds of purposes. These meeting pods come in all shapes and sizes to meet different needs. Pods can be open like the office itself or closed off for privacy and confidentiality. Closed pods are more beneficial because of their natural soundproofing. Open pods still have some basic level of soundproofing, so people can still hold private conversations. acoustic pods for offices Where was his buddy? It was his teenage son who’d obviously given up on his father and was swimming above us with two other divers, in the shallows, trying to conserve his air against the hard finning he was doing.

I was angry to say the least. I kept thinking that this person whom was known to me only because we were on the same liveaboard boat, had forced me to take risks with my own health and seemed oblivious to that fact. On the other hand, had he gone missing it would have ruined the trip for everyone on board.

Eventually, after a precautionary extra wait at 20 feet (since I had no idea of his dive actual profile and mandatory decompression stop requirements) we broke the surface at which point I emphasized in no uncertain way, “Nigel, if you forget to put on your computer, you must go back to the boat and get it.”

His reply was unprecedented. He said in a quite matter-of-fact tone, “I decided not to bring my computer because it had stopped working. It went into SOS mode on the previous dive.”

Please read the instruction manual of your diving computer. Although you may always use it in No-stop diving mode, be aware what the display looks like should it go into Deco-stop mode. It will show a stop depth and either a total ascent time or a stop-time or both at this time. Don’t ignore it.

We flew back to the UK on the following day and I wondered how I would feel if the plane got diverted because he started to suffer the symptoms of decompression sickness. As it was, he didn’t.