I was in the Bahama Islands in the late 1960’s. I had just awakened my mania for Scuba and decided that Going Diving was I wanted to do with my life. I was glowing with the excitement of self-discovery when I was confronted with the shocking news that two local divers had died trying to break the World Depth Record for Scuba Diving on Air.

I seem to remember they were diving out of Small Hope Bay on Andros Island. The team of three had successfully completed previous practice dives to record depths and were ready for the officially sanctioned Record Dive to make them the World Record holders.

Just hearing of the attempt got me thinking weird thoughts. I had just been studying partial pressures of gasses, and learned that their medical effect changed as the partial pressures increased. Nitrogen became narcotic and produced “Rapture of the Deep” – Nitrogen Narcosis. Oxygen at a high enough partial pressure became toxic and could produce out-of-control muscular spasms.

The gases in air become poisonous with increasing depth. It seemed to me that what these divers were actually doing was equivalent to seeing how much Arsenic they could take before they would die. Pretty stupid, I thought, what is the point? And more than that, what organisation could possibly sanction such a record. Would it qualify for the Guinness Book of Records?

But these divers claimed they had developed special techniques that prevented them from getting poisoned, something to do with ice packs and meditation, possibly? I did not pay much attention as I had already made my mind up that the whole thing was crazy.

I discovered later that the three started their descent, but one became distressed and abandoned the dive at about 300 feet. He managed to regain the surface. The other two continued to descend – eventually disappearing off the echo-sounding chart never to be seen again.

I don’t think that record-breaking dives are sanctioned anymore for scuba diving breathing air, at least I hope not. But breath-holding records in a multitude of categories are still popular – and still occasionally fatal. It all seems a bit pointless to me. The joy I get being underwater is from the marine life that I am able to swim with, the sublimely beautiful marine landscapes, the poignancy of visiting a long sunken ship or aircraft wreck, and the “back to the womb” sensation of weightlessness. I like the fact that diving is intellectual as well as physical.

I certainly believe that with developed skills, and the right equipment and knowledge, dives can be safe even if deeper than the standard 40m. I am quite happy at 60m, and have been deeper – but eventually recognised a depth that takes me out of my comfort zone, and have no intention of ever going deeper than that. I rarely use only air for these exploits. I may use air for the deep part of the dive, but then switch to Nitrox or even pure Oxygen for decompression.

Fundamentally I love life and diving, and have no intention of killing myself. Although I admit the thought of another two years of Julia Gillard is truly depressing.

Anyway, I am proud to tell you that I am now claiming the World Depth Record For Scuba Planking on the Turret Gun of a World War Two Aircraft Wreck.

Someone had to do it.

I have just spent the month of June in Milne Bay PNG aboard Captain Craig de Wit’s live-aboard dive boat the magnificent MV Golden Dawn along with renowned photographers Tony Wu and Julian Cohen and some other great divers. Check out www.tonywublog.com for details and see some of the great photos that Tony took during the cruise. He’s a smart chap, Tony.

Craig provides diving for Grown Ups, but made an exception and allowed me aboard. No doubt I have been diving too deep for too long, but I do know a few fishes and seem to be the only diver who usually makes it back to the boat and does not need a pick up.

Some of the team used re-breathers, but I stuck with Nitrox, of various concentrations depending on the dive profile. By the way, although I use Nitrox, I dive as if I am breathing air. It is because I think it is safer – and perhaps the fact that my two wonderful 18 (?) year old Suunto Solution computers have no Nitrox mode. I swap them between dives so I get longer bottom times. OK, I just wrote that to see if you are still with me.

For the B17 Bomber “Blackjack” dive to maximum depth of 46m I used 27% Nitrox with decompression on 32% Nitrox. The dive was carefully planned. Go down, swim around, and come back up again, especially the last part. But I jest.

We had a surface buoy marking a descent line down the reef wall off Boga Boga village with an emergency gas supply at 20m. A slow steady descent down this line leads us to the aircraft. With no current running it was easy to make a single pass along the fuselage, shooting photos at the nose and cockpit area and gradually working towards the tail where the broken tip of the starboard tail plane conveniently points back to the line.

Bottom time was no more than 15 minutes, or half a tank of gas which ever came first, and decompression stops took place, following the line at first, along the coral wall. Moving slowly with right shoulders along the wall, divers could swim into a coral lagoon, sheltered from the waves, for an easy pick up. Since Golden Dawn was moored well away in a sheltered spot, even I had to get this pickup.

During the dive I was to ‘Plank” on top of the turret gun and Craig was to take the photo which has to be posted on the web. Planking is the latest craze for deranged people trying to get attention. I am perfectly qualified. You stretch out flat, like a plank, on some incongruous object.

Planking at depth is of course much safer than planking at height above water from where several have fallen to their demise. Nevertheless tension was high as I glided and soared into position above the gun. Someone thought they saw a dolphin! 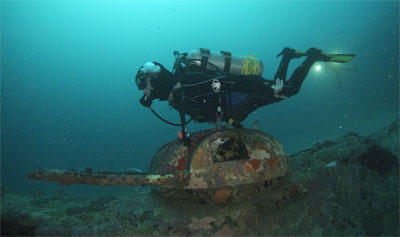 As I settled into planking pose Craig swooped in for the photo. Looking at it I see my technique could have been improved somewhat by straightening my legs and pointing my fins a bit more, but my 42 years of training took over and I adopted the perfect diver’s relaxed power position instinctively ready to zoom away from any marauding predator.

Actually my knees were a bit stiff ….. and I learned that perhaps I should not be so demanding on my underwater model. I once took a bunch of Eileen Ford New York models diving and studied their technique very carefully on every dive for quite a long time over and over until I ran out of air. Somehow I imagined that I would look as elegant, but it seems I just look like a silly old git in a black wet suit. But it is probably the lighting. For some reason, I never had wet suits when the models were around.

But there it is, my own world record. I cunningly made it at 41m depth to discourage others from diving deeper. That would be very foolish of course. Especially if I found out.

Later I’m going to tell you more about the Golden Dawn adventure – about Julian’s underwater crocodile encounter, and the 0900 dive to a wrecked Beaufighter aircraft at 61m that was so dark it turned into a night dive, and the four Wobbegongs under Samarai Wharf trying to feed on the zillions of baitfish, and the Dog House at Diving Dog Passage, and the night of the Sea Jellies, and the most beautiful lime green Rhinopias, and my new fish … and rapture of the deep.

Just hope people will not say, “Halstead’s a real Planker.”