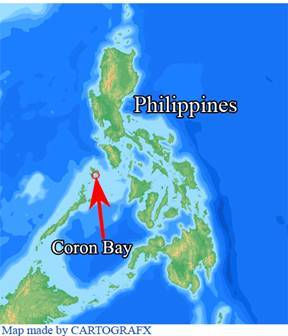 When Ben Davison first approached me about writing a blog for Undercurrent my first thought was “Great, I can write a puff piece about my organization, Seacology, for my favorite dive magazine.”  But then I channeled the voice of my friend and fellow blogger Bret Giliam saying “Duane, first write about an interesting dive adventure before you discuss Seacology.  You’ve led dive trips all over the world.  Write about that.”  Okay, Brett, I hear you.  If readers want to know about Seacology they can read Bret’s article of several years ago in Fathoms.  Instead I will take this opportunity to write about the wonderful wruck (no, that’s not a typo) diving of Coron Bay in the Philippines.

During World War II, the Japanese anchored a fleet of ships in Coron Bay, 180 miles southwest of Manila.  The ships were well camouflaged and covered with trees so that they would resemble islands.  While comparing aerial reconnaissance photos taken at different times, a very perceptive navy analyst realized that several of Coron Bay’s “islands” had moved.  Orders for an air strike on this Japanese fleet went out and U.S. Hellcat bombers on carriers based 350 miles away soon took off for Coron Bay.  Since the bombers had to cover a very long distance before they reached Coron, their time over the Bay before running out of fuel was extremely limited. Some say their actual mission lasted no more than twenty minutes, but in that brief time the entire Japanese fleet was wiped out.  Coron Bay now has eleven diveable wrecks, including some, such as the Tae Maru oil tanker, that are over 500 feet long.  Most of the dives are somewhere between 30 and 120 feet deep and several of the wrecks still have construction supplies in their holds and anti-aircraft guns on their decks.  Because of their remote location vis-a-vis the United States and Europe, the Coron Bay wrecks are relatively unknown and have been called “the world’s best kept diving secret.”

A confession is now in order:  Before diving Coron, I would not have called myself a wreck diving aficionado, as I prefer seeing coral reefs and marine life.  But the wruck diving of Coron Bay has changed my mind.  Wruck diving – a term I coined on this dive trip – combines features of wreck and muck diving.  The visibility of Coron Bay is quite poor, but-as with muck diving-the surface of the wrecks were full of strange and wonderful creatures.  I have never seen more varieties of nudibranchs in such a short period of time as I saw on the decks of many of the wrecks.  And the variety of flabellinas was amazing.  No, flabellina is not a term our dive guide made up to poke fun at the large girth of many American divers; it is a family of nudibranchs often characterized by a “hairy” appearance. I also saw more crocodile fish than I have in my last ten years of diving.  Sprinkle in loads of scorpion fish,  add a pinch of shrimp fish, fold in schools of batfish and barracuda, let simmer on the wrecks themselves, season with the interesting history of Coron Bay, and you’ve got yourself a recipe for memorable diving.

While on this trip I visited a Seacology project on Palawan in the Philippines.  Check out this video if you want to see footage of our visit and how we are helping to protect marine life in exchange for assisting local villagers earn sustainable livings by harvesting and selling cashews.

If I have whetted your appetite for some more wruck diving, join me on Seacology’s October 30-November 6 trip to Chuuk (Truk) lagoon Micronesia.

And now it’s time for a word from our sponsor: Seacology
Noted marine biologist Dr. Sylvia Earle has described the importance of preserving the world’s “hope spots” with a global network of marine protected areas where endangered species can be protected and biodiversity preserved. Seacology’s global projects seek to fulfill this goal both in the oceans and on islands. 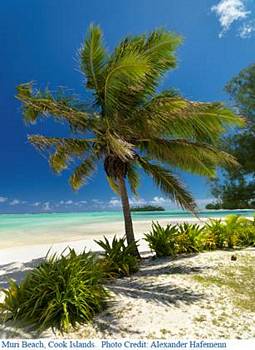 One such project is Seacology’s work protecting the Muri Coral Reef on the island of Rarotonga, one of the Cook Islands. The island is surrounded by a lagoon, which is separated from the ocean by the island’s many coral reefs. Rarotonga’s famously picturesque coastline contains stretches of sandy beaches and beautiful palm trees, making them popular tourist destinations. However, the lagoon and coral reef have recently been threatened by increasing development and tourism.

The community members of Muri Village on Rarotonga wished to protect their local reef, lagoon, and beaches against the many threats they face. At the same time, they desperately needed improvements to their community center, which serves numerous purposes, including a cyclone evacuation site, cultural arts center, youth gymnasium, and health clinic. Seacology stepped in to help them on both fronts, providing funding for the needed renovations, in exchange for a commitment to set aside 413 acres of their lagoon and coral reef as a protected area, where harvesting of coral, mammals, birds, and any non-subsistence fishing is strictly prohibited.  Seacology’s direct collaboration with Muri Village is respectful of local needs and traditions, while reaching a mutually beneficial outcome that protects fragile coral reefs. Working with the local people ensures that the new reserve is truly protected-locals are responsible for establishing and monitoring the reserve, and have a vested interest in maintaining its integrity.

Seacology has over 200 projects like the Muri Reef Conservation project on 116 islands in 45 nations around the planet. It is this grassroots approach than can ensure sensitive ecosystems with rich biodiversity like coral reefs don’t go the way of the dinosaurs.  You can help protected the Muri Lagoon Reef by sponsoring an acre there for as little as $40.  You can adopt an acre as a gift for someone for any special occasion.  The honoree receives a beautiful card featuring a photo of the site along with information about the project. If you are so moved, please visit our Save An Acre page.

7 thoughts on “Wruck Diving in the Philippines”