America has a coral barrier reef off the Florida Keys. While this is no challenge to Australia’s Great Barrier Reef, it does have something Australia does not. For the past 25 years, hundreds of divers and snorkellers have come together for the annual Underwater Music Festival held at Looe Key Reef. Musician-divers mime on whimsical instruments created by a local artist, while a pre-selected radio playlist is streamed live from underwater speakers.

Ocean-themed songs, such as the Beatles’ “Yellow Submarine” and “Octopus’s Garden,” are featured. Sound travels well through water, indeed faster, and is sensed through the bones of the skull rather than the ears. This produces, we are assured, a “particularly ethereal” impression. The Festival pokes fun at itself and attracts big name musicians such as “Paul McCarpney” and “Ringo Starfish.”

Australia, however, has not entirely been left behind in the underwater music stakes. An end-of-the-millennium underwater concert in Sydney Harbour, Sonic Waters II, featured a sound system attached to the Shark Bay shark-netting moorings. Divers and snorkellers could listen in – and so could the marine life. A shark was reported to have turned up only to immediately become entangled in the nets.

The Sosno and Thevenium are musical instruments specifically designed for playing underwater. Both rely on primary sound being produced by striking; the resulting clangs are amplified and modified electronically. I have not heard these instruments but I can imagine why a shark might turn suicidal. 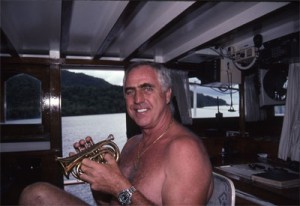 I confess. I am a diver, but have a not-so-secret life as a failed musician. Basically I failed to learn how to play the trumpet, trombone and euphonium, though I used to practice diligently – even when on board dive boats running dive cruises. My lack of talent was actually of some benefit if I had any reluctant divers. A promise of an imminent practice session was enough to get them in the water. More recently I have had better musical success on the saxophone.

Music is intensely personal and I have no doubt that a few of my guests were annoyed not only by how poorly I played, but by what I was attempting to play – generally Classics or Jazz. Occasionally I had compliments. OK, rarely. Once (only) I greeted guests aboard Telita with a Mozart CD playing softly in the background. But my first guest aboard gruffly snarled “I did not come here to listen to music!”

Pop music usually bores me to tears, it is trite, repetitive, and mostly lacks any musical subtlety. I had to undergo some (successful) radiotherapy a while back. In the treatment room it was standard practice to have a poor quality radio/CD player churning out pop music. I asked for it to be turned off but the staff knew better – they insisted it would help me relax. I told then in no uncertain terms that the “music” was making me angry and destroying my will to live. They turned it off.

I could have brought along my own discs and was tempted to bring some that would have no doubt driven the staff nuts, but that was a fleeting unkind thought. I preferred silence, and while undergoing treatment was able to mentally harmonise the gritty buzz of the radiating linear accelerator with images of cancer cells exploding. It worked, and I departed each session content and optimistic.

Cousteau called underwater “The Silent World” but actually it is not. Night dives are particularly cacophonous with carnivores crunching and crustaceans crackling. Waves can be heard thundering on reefs, and a rainsquall can drum a sudden Stacatto. Fish grunt and thump, and cetaceans are famous for their various whistles and moans. The Humpback Whale song is unforgettably heart-rending.

Adding to these natural sounds my own imagined music accompanies me on my dives. I hear J.S. Bach as schools of fish surge and swoop, Stravinsky ballets as barracuda swirl, and John Williams, inexorably, as sharks menace with their jaws.

It is all rather fantastic, but I try to make my dives as perfect as Heifitz playing the Korngold concerto. I can make my dives Pianissimo or Forte, Adagio or Presto. The harmonies of the sea resonate with my diving. Weightless, gliding and soaring, I am as rapturous as when transported by glorious music in a concert hall.

Working with a model can be as satisfying as the fusion of a string quartet. Four become one when the communication between model, sea creature, the ocean environment and photographer moves to the perfect moment of resolution, when I press the camera shutter.

Then a speedboat roars overhead and reality returns. Dissonant bubbles rend my ears, and divers seek attention by clanging their tanks.

Loud pop music on deck is already the curse of otherwise perfectly habitable dive boats; I do not want this “service” extended underwater. Diving for me is an escape from the pandemonium of modern life above water. But it is happening. Speakers can be embedded in the hulls of dive boats. There is a diver recall device that, and I quote:

Individuals can now dive with their SwimMan Apple iPod Shuffle, or use an iDive 300 Deep Dive waterproof case that enables them to “Dive with more than just the bubbles from your regulator providing the soundtrack” and not disturb anyone else.

Dive boat crew please note – keep the music OFF. Your young and uneducated ears might cope, but older folk such as myself not only dislike the noise, we have difficulty in having conversations above it. The inevitable racket from the generators and engines just makes it worse.

And please, please, spare the underwater world from muzak, the broadcasted din of humanity, and the inane babble of rap. Be silent! Leave us to Nature’s water music, and the imagined symphonies in our heads.

3 thoughts on “The Noisy World”