Years ago a New Zealand dive instructor working as an electronics technician in Port Moresby asked me to teach his wife how to dive. A wise man, I thought, destined for marital bliss.

She joined one of the courses I was running at the time, did very well and became a certified Scuba Diver. On her very first dive after completing the course she was diving with her husband. They had just reached the bottom when the husband swam up close, and signalled that he had no air and wished to buddy breathe (yes, really that long ago – before octopus/alternate air). The wife was a bit peeved thinking that he was testing her new skills and gave him the finger. However a more frantic set of signals, and a distinct lack of bubbles from her buddy, made her realise that her husband actually could not breathe and needed to share her regulator.

She assumed the position I had taught her, and flawlessly shared her regulator. The husband soon settled down and they made a safe ascent together. At the surface the husband explained that his regulator had suddenly failed, and he could not get any air. He thanked me later for doing a good job teaching his wife, and asked me to look at his regulator to find out the problem.

I stripped the regulator, an original US Divers Conshelf  XIV – but I already had a good idea what had gone wrong. The first stage of these regulators has an upstream valve opened by a thin stainless steel pin with a cylindrical knob at one end. If the knob sheered off, the pin could not open the valve and, suddenly, it could not supply air to the second stage. Mostly the problem with these first stages was that the high pressure seat would fail – but if this happened the regulator would provide too much pressure and the second stage would free flow – not nearly as serious a problem.

I did not care for regulators that were not “fail safe”, that is, no matter how they failed you should still be able to breathe. In my dive shop, the Diver’s Den in Port Moresby, I did not sell “diaphragm” first stages as they all in theory (and some in practice) could fail catastrophically. Over the years the pin design has been changed and I have not heard of any diaphragm first stage failing due to a failed pin in many years (let me know if you have).

But I championed the flow-through piston design, which I believe was invented by Scubapro and which is regarded as failsafe and foolproof. They would occasionally whistle, but that was easily fixed with a nylon washer each end of the main spring. I sold Scubapro, Sherwood, Dacor, and Oceanic brand regulators, qualified as a service technician for these brands and guaranteed them personally. Apart from minor adjustments I never had any problems, and lots of satisfied, live, customers.

One of my ex-students asked for an appointment with me in the Diver’s Den to discuss his purchase of a set of Scuba gear. I went through the various brands and their various pros and cons. It took about two hours. At the end of this he thanked me profusely then explained he was off to Singapore next weekend and would be buying his gear there. I informed him that he would not get a better bargain than at the Divers Den, and that I personally guaranteed everything, but gave me that ignorant know-all smile that these kind of idiots have, and left the shop.

A couple of weeks later I was amazed to see his brazen hide back in my shop. He was having trouble putting all his new gear together. I took a look at it and burst into laughter. A scoundrel in Singapore had sold him an old style regulator first stage (old stock) with the small high-pressure connection rather than the latest wide thread (universal now) that was on his pressure gauge. “What should I do Bob?” he whined. Now I am a sweet, kind, forgiving sort of guy – but only after I have had revenge – so I told him – you guess –

(a)    Why don’t you go back to Singapore and ask them to exchange it?

(c)    Seeing as how you are such a good customer, I have an adaptor here I will give you.

Alas, no prize for the right answer(s).

Believe it or not I still have not got to the point of this month’s Adult Section. Here we go. 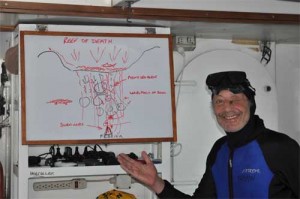 I have been diving a lot recently, my very latest expeditions with the self proclaimed World’s Greatest One-eyed, Jewish Underwater Photographer, no less than the esteemed Irvin Rockman. Irvin started diving before it was even invented and is the President for life, infinity and beyond of Underwasser Yidden, a group of profane reprobates who travel to PNG to un-civilise the Natives and promote the traditions of Melbourne Business Society.

Irvin emailed me a couple of months before the trip to seek advice on the purchase of a new regulator. As long as he could get it cheaper than anyone else, money was no object. I no longer have a dive shop, thank Neptune, and provided a short list of two, the most expensive (and very expensive it is in Australia, think Rolls Royce) being the one Irvin Picked. I also advised him to get it from his local dive shop – but alas he had discovered a website that sells them at a huge discount so ordered it from overseas.

We joined the FeBrina for a double cruise of diving for adults, exploring Milne Bay and ending in Rabaul.  Just about every dive was completed with exuberant praise for the breathing qualities of the new regulator. Then, half way through the trip, it failed. Irvin turned his tank on to be greeted by loud hissing as Nitrox blasted from the water pressure balance vents in the first stage. The regulator had not failed catastrophically; it could still be breathed from had the failure occurred underwater, but was impossible to dive with. The crew fixed him a spare.

At this time I got a bit excited. I had recommended the regulator; I expected great performance and a long service life for my friend. I did not expect it to fail within 20 dives. I was embarrassed and angry. Someone in the dive industry is losing sight of primary objectives. Diving gear is life support equipment. Regulators have to breathe well and be reliable. What is happening instead is that gear is becoming more complicated, more expensive, technically brilliant (or just plain weird, check out fins.) and totally unreliable.

Toyota just managed to do exactly that with its cars – wonderful performance as long as you do not mind accelerators sticking and brakes failing.

Irvin now has to send his regulator away to USA to get fixed. It would have been easier for him if he had purchased it from his local store, perhaps even less expensive in the long run, and of course it is much more fun to abuse someone in person.

A couple of years ago my trusty old fins cracked so I bought a new pair made by the same manufacturer. They had fancy quick release straps and were a bit stiffer than my previous pair. Within 6 months the fancy clips had broken, the foot pockets were splitting and my legs were tired. I took them back to my local store, Tusa Dive in Cairns where the professional and very knowledgeable manager Dave acknowledged the problem, and replaced them with a pair of my original fins brand new that he had managed to find in a forgotten corner of the store – relegated to that position as the clips and straps had been removed. I had plenty of fin clips and straps, my problem was over – what’s more they are gorgeous yum-yum yellow, perfect for attracting sharks and they match my buddy Irvin Rockman’s. We are the boys in yellow fins.

Another thing, if you work on dive boats you are setting yourself up for workers comp with weight integrated BCs. I hate them. They make tanks too heavy for the crew to lift. I also hate those stupid harnesses where the strap breaks free from its Velcro fastening and flaps around behind the diver. Amateur hour. Not long ago my 15 year-old snorkel disintegrated, but my new snorkel nearly drowned me with a faulty valve. I sucked more water than air and that was in flat calm conditions. Something is wrong with the world.

Here is my message is to the dive manufacturers. Cut the Crap. Go back to the basics, make us gear that works and is reliable. You make it; why not try using it sometime?